In one of our other articles we spoke about the fact that learning is not the same as practicing.

Here an example of how we change in lessons between aquiring skill and applying them to learn how to play.

In a recent session y had a pupil with a 36 handicap asking me about help to improve his inconsistency in Pitching. He hit fat, thin and good ones. Of course there is various ways on how to go about it, I chose the following.

In this case i realised he had a certain ability to play good shots, just not in a more or less consistent way.

So I chose an excersise that in reality increases the difficulty for the golfer, which in turn will increase his ability to time the swing better. We use “manipulated excersises”, which creates more necessity for the body to perform the excersise.

The player was setup to do short 30 m pitches using a maximum range of motion of his wrists. This made him change the speed of the swing (thus the timing) to hit the ball well.

The use of wrists shortens and lenghtens the shaft in relation to the ground. When you start to set the wrist angle, the club looses its length to the ground. This introduces one piece that this golfer lacked in my opinion, it’s the timing to make the club go back to normal lenght at the right place of the swing.

This image shows the downswing of a club and the release of a clubhead. In relation to the horizontal lines the clubhead gets longer.

So the pupil asked me: “but why would you make me use the wrist now when on a normal 30 m pitch shot you would advocate using less? Why do something completely different than on the golf course.”

The answer: because in this case we don’t practice pitching, but we want to improve your ability to time the release to create a good impact. Knowing from daily experience that even if we say to limit the use of the wrists on short pitches, it’s a fact that we sometimes do use them. So as a Teacher I need to give a golfer Superpowers in relation to those weeknesses.

So this excersise is geared towards improving timing capacity, that’s why we manipulate the excersise to a degree so the player has to deal with acceleration and wrists. 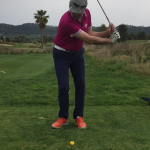 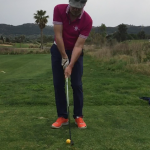 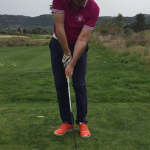 Image 1: Short swing with lots of wrists (be aware that this is not how we teach a pitch)

Image 3: hitting behind the ball in one of the other intents.

One of the other beneficial aspects of the excersise beside improving timing capabilities is that the pupil notices what wrist action does to the pitch shot and how it affects consistency and distance control.

This other excersise hitting multiple balls one after another without stopping helps improving rythm, stability and balance, reaction, instinct and adds fun to practice. It is vital to improve golfers abilities to help them coordinate well and get more consistent in a “somewhat inconsistent sport that golf is using a naturally built-in inconsistent system (the body)”.

That last sentence will surely make for another very interesting article.

Now lets continue with how to apply abilities to practice how to play.

This lovely lady golfer mentioned that her inconsistency often came with shots from over the top and getting deep divots resulting in poor impact/outcome. Again there are always different ways of going about it. I decided that I did not want to introduce lots of internal info to this hcp 17 player-brain. It seemed better to work with external focus (orientation in relation to the target) and let her figure out the solution rather then telling her how to make a swing.

The use of players coordination is something I use very frequently in my lessons to improve movement solutions which then create less conflict in the moment of performing.

My teaching instinct tells me to do this especially when I have players with acceptable movement stability to create consistent golf.

How I do this:

I like to manipulate situations in a way that the golfer will have to find the right way to move to achieve the goal. That uses internal coordination instead of technical thoughts from outside.

These following images are already from the moments we apply the experienced solutions in the correct amounts to relate it to on course play. 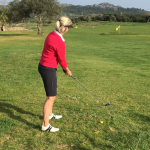 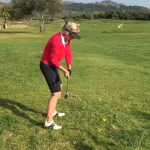 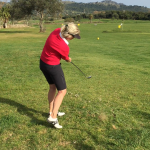 Target orientation and line up to the left of the target. The player asks herself various times about where the target is and where the ball has to go rather than thinking about how to make a golf swing.

Reorganizing the swing path and face at impact to bring the ball to the target. It’s not how to swing but where to go with the ball. We change the targets and clubs after every shot, we also change shot types after very shot (chip, pitch, mid iron, hybrid, fairway wood).

Instead of feeling the club coming out to in and steep, she now felt the club moving more from inside and more shallow, still at times feeling the face a little off to the left but with repetions we managed to get better at it.

I really loved this lesson with this adorable lady that has a deep love for the game of golf.

The difference of training and practicing in the end is a game of words but I believe it is important for me to distinguish between helping with acquiring skills and showing them how to play using the created skills.

This website uses cookies to improve your experience while you navigate through the website. Out of these, the cookies that are categorized as necessary are stored on your browser as they are essential for the working of basic functionalities of the website. We also use third-party cookies that help us analyze and understand how you use this website. These cookies will be stored in your browser only with your consent. You also have the option to opt-out of these cookies. But opting out of some of these cookies may affect your browsing experience.
Necessary Siempre activado
Necessary cookies are absolutely essential for the website to function properly. This category only includes cookies that ensures basic functionalities and security features of the website. These cookies do not store any personal information.
Non-necessary
Any cookies that may not be particularly necessary for the website to function and is used specifically to collect user personal data via analytics, ads, other embedded contents are termed as non-necessary cookies. It is mandatory to procure user consent prior to running these cookies on your website.
GUARDAR Y ACEPTAR